Artspace and EC3 Present: MAAWANJI'IDIWAG – THEY COME TOGETHER
An EC3 Cultural Incubator

Please join us on Wednesday, July 12 at 6pm for Maawanji'idiwag – They Come Together, an evening of talk and sharing with William Kingfisher, Dylan Miner, Thomas Olszewski, and Olivia Whetung.

The evening will begin with a discussion between Kingfisher, Miner, Olszewski, and Whetung that will touch on their respective practices, as well as the broader issues of food and territorial sovereignty from culturally specific Indigenous worldviews.

Following the discussion, Kingfisher and Olszewski will provide a small community feast for those in attendance. The feast will be prepared using food harvested from their gardens.

The evening will coincide with the launch of Aanikoobijigan // Waawaashkeshi, an artist’s book produced by Dylan Miner and published by Issue Press in collaboration with Artspace. A limited number of copies will be available at Artspace for a small donation.

Maawanji'idiwag – They Come Together is jointly presented by Artspace, the Electric City Culture Council, and the Nogjiwanong Youth Solidarity Initiative.

William Kingfisher is an independent curator, gardener, and member of the Gitigaan Project, an art organization that takes gardening and food as starting points for the exploration of decolonization methods, different ways of being in the world, understanding food production as politics, and to examine the interaction between the local and global concerns. He is a member of the Chippewas of Rama First Nation, Rama. He has worked as a researcher/curator at the Canadian Museum of Civilization (now Museum of History) (1998 – 2004) and at Trent University, Indigenous Studies Department, Nozhem First People Performance Space as an associate producer (2013). He has an MA in Anthropology from Carleton University (2004) where he wrote a thesis on contemporary Indigenous art in Canada. His recent project with the Art Gallery of Peterborough Arthur Shilling: The Final Works, is currently touring throughout southern Ontario.

Dylan AT Miner is a Wiisaakodewinini (Métis) artist, activist, and scholar. He is currently Director of American Indian and Indigenous Studies and Associate Professor in the Residential College in the Arts and Humanities at Michigan State University. Miner is also adjunct curator of Indigenous art at the MSU Museum and a founding member of the Justseeds artists collective. He holds a PhD from The University of New Mexico and has published approximately sixty journal articles, book chapters, critical essays, and encyclopedia entries. In 2010, he was awarded an Artist Leadership Fellowship through the National Museum of the American Indian (Smithsonian Institution). Miner has been featured in more than twenty solo exhibitions – with many more planned in the near future – and has been artist-in-residence or visiting artist at institutions such as the School of the Art Institute of Chicago, École supérieure des beaux-arts in Nantes, Klondike Institute of Art and Culture, Rabbit Island, Santa Fe Art Institute, and numerous universities, art schools, and low-residency MFA programs. His book Creating Aztlán: Chicano Art, Indigenous Sovereignty, and Lowriding Across Turtle Island was published in 2014 by the University of Arizona Press. Miner is currently completing a book on Indigenous Aesthetics: Art, Activism, Autonomy and writing his first book of poetry, Ikidowinan Ninandagikendaanan (words I must learn). In 2016, Miner has had solo exhibitions in Ontario and Vancouver, conducted a workshop in Chile, done a residency at the MacKenzie Art Gallery, and exhibited work in Sweden and at the Banff Centre.

Thomas Olszewski a chef, gardener, builder of traditional structures, and member of the Gitigaan Project. He owns Grandfather’s Kitchen and Catering located on the Curve Lake Reserve where his goal is to feed the anishinaabe community, both on reserve and off-reserve, the best food possible. He uses his organic/traditional garden in Curve Lake to grow a lot of the food for his catering business. He is anishinaabe from the Chippewas of Rama First Nation and lives on the Curve Lake First Nation reserve.

Olivia Whetung is anishinaabekwe and a member of Curve Lake First Nation. She completed her BFA with a minor in anishinaabemowin at Algoma University in 2013, and her MFA at the University of British Columbia in 2016. Whetung works in various media including beadwork, printmaking, and digital media. Her work explores acts of/active native presence, as well as the challenges of working with/in/through Indigenous languages in an art world dominated by the English language. Her work is informed in part by her experiences as an anishinaabemowin learner. Whetung is a recipient of a CGS-M Social Sciences and Humanities Research Council Award and an Aboriginal Graduate Fellowship. Whetung is from the area now called the Kawarthas, and presently resides on Chemong Lake.

Maawanji'idiwag – They Come Together is jointly presented by Artspace, the Electric City Culture Council, and the Nogjiwanong Youth Solidarity Initiative. 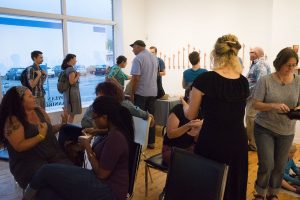 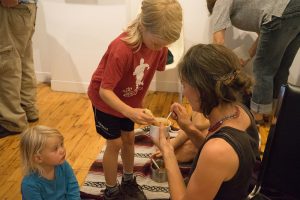 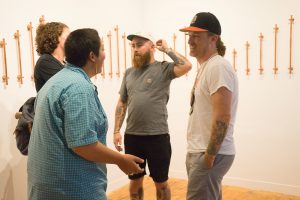 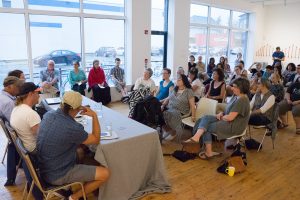 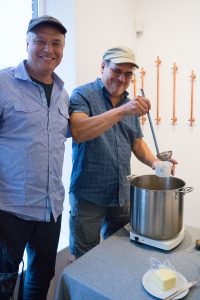 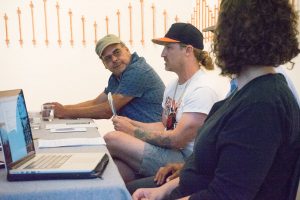 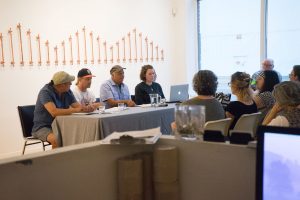 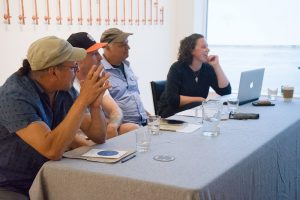 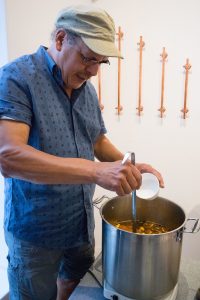