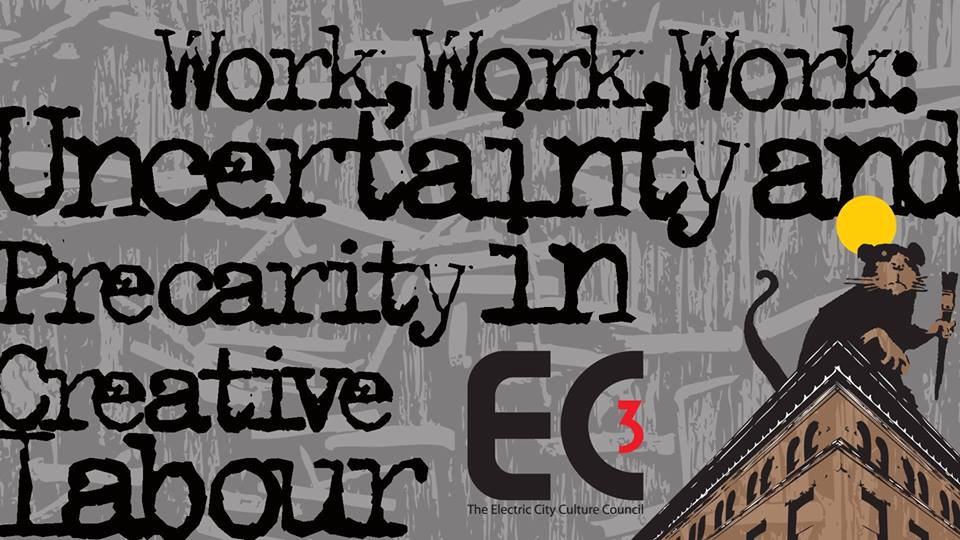 Precarious workers are those that fill permanent jobs but are denied permanent employment rights. Why is so much creative labour precarious? What are the consequences of increasing precariousness for work of all kinds, across the board? How does precarity impact art practice and our cultural experiences and environment?

“Precarity is a precarious existence, lacking in predictability, job security, material or psychological welfare. The social class defined by this condition has been termed the precariat.” - Wikipedia

Smokii Sumac
Smokii Sumac is a proud member of the Ktunaxa Nation and a PhD candidate in Indigenous Studies at Trent University where their dissertation research examines Indigenous literature through the lens of their lived experience as a Ktunaxa two-spirit person. Smokki’s creative work has been published in Canadian Literature, Aanikoobijigan//Waawaashkeshi (a project by Anishinaabe/Métis artist Dylan Miner), and The Capilano Review. They live in Nogojiwanong (Peterborough, Ontario) with their cat, Miss Magoo.

"Nothing About Us Without Us": On Indigenous Literatures, Art, and Cultural Appropriation
Smokii Sumac comes at the idea of precariousness as both a Ktunaxa writer and a scholar in the field of Indigenous literary studies. With the cultural appropriation "debate" at the forefront of conversations in the CanLit context over the past thirty years, Smokii takes a hard line on the heart of the issue: when you tell our stories (or attempt to re-create our artwork), you are stealing from us. Exhausted by this seemingly never-ending conversation, Smokii critiques the idea that there is a "right" way to write (or paint) Indigeneity into your non-Indigenous work, and seeks to stop settler entitlement to ("inspiration" by) Indigenous work in its tracks.

Craig Berggold
Media artist Craig Berggold strives to combine social justice activism with a contemporary art practice. His award-winning films have been broadcast on television and screened at film festivals, museums and art galleries around the world. Currently, Craig is producing a video on the “Age of Precarious” for his PhD in Cultural Studies at Queen's University in Kingston, Ontario, where he is a Teaching Fellow in the Film and Media Studies Department. At Queen's, Craig is also President of Public Service Alliance of Canada (PSAC) Local 901 representing 2000 precarious academic workers. For ten years at Vancouver’s Emily Carr University of Art + Design Craig taught over 30 courses on video art, film production and experimental documentary practice. At Simon Fraser University’s Special Collections Library, he is the lead researcher for The Canadian Farmworkers Union Archive Project.

Craig Berggold asks some critical questions. Who are the precarious? Today, a majority of people work in temporary, intermittent, part-time, jobs and internships. Their lives focused on networking, flexibility, self-exploitation and cooperation, are frequently migrant. The precarious often exist in perpetual debt, with an increasing predominance of educated young people and women as a majority of the global precarious workforce. How do we imagine community among the precarious? What are the positive values of precarity? An essential feature of precarity is to break down and disperse established groups, sectors, boundaries and positions. This presentation will give a visual survey of contemporary citizens’ organizations; from the Precarious Workers Brigade (London, UK), to the Ontario Artists Union.

Brian Nichols
Brian Nichols is a psychotherapist in private practice in Peterborough, Ontario. He uses expressive arts therapy as the primary modality in his work and in his life. His art making and writing have been primarily influenced by his ten trips to rural Zimbabwe to volunteer in a hospital where 90% of the patients are HIV positive; multiple family suicides; post-earthquake Haiti; and 25 years of involvement as a therapist in trauma-based therapy and palliative care and grief support work.

Brian’s presentation will focus on stress and mental health challenges that he has personally experienced and witnessed in others and the role that art-making can play.

Sally Lee
Sally has been a member of the arts community for over 25 years, serving in her current role as Executive Director of artists’ rights organization CAR/FAC Ontario since 2015. She has worked at organizations representing a wide range of disciplines, with management and leadership positions at the Toronto International Film Festival, Soulpepper Theatre Company, and the Toronto Reel Asian International Film Festival. Other groups where she has worked or served on the board or a committee include the Liaison of Independent Filmmakers of Toronto, the Images Festival, the Canadian Filmmakers Distribution Centre, Artists for Peace and Justice Canada, Samara Canada, Pan Am Path, BorderLines Magazine and the Women’s Press. She currently sits on the board of Wavelength Music, the Advocacy Committee of the Toronto Arts Foundation, and the Advisory Board of Reel Asian. She has also participated in the production of several independent films and music videos. She is active in Toronto’s independent music community, and currently plays bass and sings in the band “Long Branch”.

CAR/FAC Ontario works to create a social and economic climate where the labour of artists is respected and valued in the same way that the work of individuals in other professions is valued. In addition to a range of programs and services including the CAR/FAC minimum fee schedule and the VALCO legal clinic, CAR/FAC Ontario is heavily involved in various advocacy
and sectoral initiatives to advance the professional and economic standing of artists.

Sally Lee will touch on some of the current sectoral discussions and advocacy the organization is actively involved in as the voice of professional artists across the province. These include the Artist Resale Right, ODSP and arts grants, gentrification, arts funding, the challenges and opportunities of digital, and income precarity among cultural workers.