705-313-0053
beaudixon66@gmail.com
https://www.beaudixon.com/
As a black artist living in Ontario, I feel the need to work harder than the average white artist in fear of being stigmatiized as an uneducated or unqualified practitioner in the entertainment industry. Although I identify myself as an African Canadian or person of mixed race, my skin colour does not define who I am. However, whether I'm acting, writing or composing music, I feel it is my responsibility to be an agent of change and growth in the work that I create. 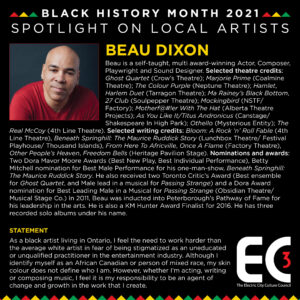 He also received two Toronto Critic’s Award (Best ensemble for Ghost Quartet, and Male lead in a musical for Passing Strange) and a Dora Award nomination for Best Leading Male in a Musical for Passing Strange (Obsidian Theatre/Musical Stage Co.) In 2011, Beau was inducted into Peterborough’s Pathway of Fame for his leadership in the arts. He is also a KM Hunter Award Finalist for 2016. He has three recorded solo albums under his name.